Injuries happen every day. People get injured due to no fault of their own. A person has a one in an eight chances of being seriously injured in an auto accident. There is one car accident every ten seconds in the United States. Thinking about all the people on the road this statistic can be scary. If a person is injured in a car accident or other type of personal injury suit they should contact an auto accident attorney. Our law firm has years of experience in this field, and will help a person get the compensation they need and deserve.

An auto accident attorney will give a person advice on how to go about proceeding with a court case. Every situation is different and the attorney at this firm will speak to the person to make sure they have a chance and review the facts of the accident. They will work with the person to get their compensation for lost wages, medical bills, and emotional distress. The auto accident attorney will also represent family members in wrongful death suits if the person died due to the actions of another. The attorney will prove their injuries were due to the neglect and wrongdoing of another person.

When in need of legal advice due do not hesitate to call an auto accident attorney.

They have over twenty years of representing people that have been hurt in not only auto accidents but motorcycle accidents as well. They also represent pedestrian that have been hit or injured by a car when walking and following all the traffic laws. They will represent those injured due to drunk drivers and uninsured drivers. In addition to bodily harm the lawyers will help a person receive compensation in order to fix their vehicles and other property that was damaged due to the negligent actions of another.

As injury lawyers, it is not uncommon for us to review potential wrongful death claims involving truck driver fatigue. We often see this in the context of tractor-trailer accidents where the truck driver has fabricated his driver’s log and/or driven far in excess of his allowable hours. Many times there is demonstrated sleep loss involving the use of amphetamines, methamphetamines or other stimulants used by the driver to overcome the fatigue. 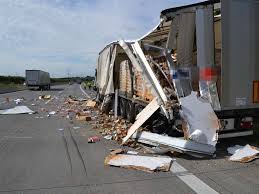 According to a newsletter we recently ran across published by a well-respected truck safety organization, there is an interesting correlation between sleep loss, fatigue and the serious impairment caused by being legally drunk. Studies have shown that the impairment from sleep loss and long working hours are almost the same caused by alcohol consumption. The longer one is awake, the slower the reaction time. If one gets too little sleep (4 or less hours) this is equivalent to the effects of .05% blood alcohol for long working hours. In one study, where people were kept awake for 24 straight hours, the slowed perception reaction time had approximately the same effect as .10% blood alcohol level which is above the level (.08%) now nationally recognized as being legally drunk. Thus, it can be clinically demonstrated that if one loses sleep for a long period of time one’s perception and reaction time is dangerously slowed.

In our personal injury practice we often see evidence of serious impairment caused by fatigue and lack of sleep. The end result of such fatigue we see in our practice is a serious collision. Increasingly, we see this, particularly in the context of truck drivers who are trying to increase their wages by driving longer and longer hours and greater and greater distances. Even though large trucks make up just 4% of all registered vehicles, and 7% of all vehicle miles traveled, the same trucks are involved in 11% of all crash fatalities. This year, as in years past, approximately 5,000 people will be killed in truck crashes and collisions throughout the country. We know from our experience that many of these crashes are preventable and would not occur if drivers kept shorter hours and were not seriously impaired by fatigue. While commercial airline pilots typically fly only about 30 hours a month, most truck drivers drive around 300 hours a month. For some reason, this has become acceptable in the workplace even though the number of people killed in truck crashes annually exceeds the number of people that are killed in major airline crashes. Query why this is so?

With improvements in technology, before long, employers and trucking companies will be able to monitor precisely the hours being kept by their truck drivers. We can only hope that legislation will follow that mandates that employers not only monitor the number of hours driven but also the number of hours taken by the driver to rest. Too many hours driving means too much fatigue which also means possible impairment of perception and reaction times. Because we see the end result of this, which is serious injury, death and tragedy for our client’s families, and we can only hope that the speed of technology will continue to develop to the point where trucking companies will have no choice but to monitor and address the significant safety issues caused by driver fatigue. For more information about Truck Accident Lawyers click here, please

With more than 240 years of combined experience, our attorneys at Gallagher, Langlas & Gallagher, P.C. possess outstanding knowledge and skill in several areas of law. Our diversity provides a powerful benefit to clients who face legal challenges affecting multiple areas of their lives.